ExaGrid appliances run an integrated Veeam data mover similar to a Linux based backup repository. With ExaGrid, there is no requirement for a Windows based gateway server.

The “landing zone” (which is the zone that will hold most recent set of data) must have sufficient capacity to keep at least one uncompressed full backup and one incremental backup. This ensures Backup copy, SureBackup, Instant VM Recovery and item-level restores will be usable for the latest restore point without rehydration overhead.

##Exagrid and Scale Out Backup repository

Exagrid appliances can be configured as part of a grid and as a Scale Out Backup Repository extent. The difference between the landing zone and the global deduplication area should then be considered.

As a matter of fact, the deduplication engine will run asynchronously and deduplicate the landing zone into a global retention zone for each grid member. Whenever a deduplicated block is already hosted on a member of the grid, it will not be treated by the local grid member.

As a consequence, each member of the grid will be considered as a unique extent holding its own data by the Veeam Scale Out Backup Repository engine, while the deduplicated data effectively used by the extent could reside on a different member of the grid. 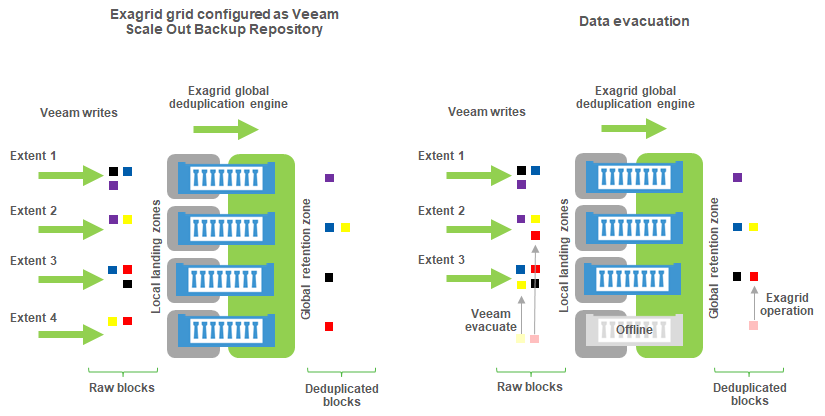 In case of extent maintenance the landing zone will be brought offline by the Scale Out Backup Repository manager. All the backup chains kept in the landing zone will be unavailable while the deduplicated part of the data held by appliance where the offline extent resides will still be available to the other members of the grid. All chains but the ones hosted on the offline member will be available for Veeam operations.

If an evacuate operation is triggered on the Veeam Backup and Replication side to remove an appliance from the grid only the landing zone will be evacuated by the Veeam transport agent. The deduplicated data should thereafter be evacuated through a specific process handled by the Exagrid support.

If the grid member becomes offline before beeing evacuated by Exagrid support some unique deduplicated blocks might be lost potentially corrupting all the backup chains of the grid.