A backup job can be started automatically or manually in the Veeam Backup & Replication console, Veeam Backup Enterprise Manager web console, by means of PowerShell, RESTful API and other.

In the initialization phase, Veeam Backup & Replication prepares resources necessary for a backup job. To help you better understand firewall settings and connection initiation flow, the process is illustrated by the diagram (see below): 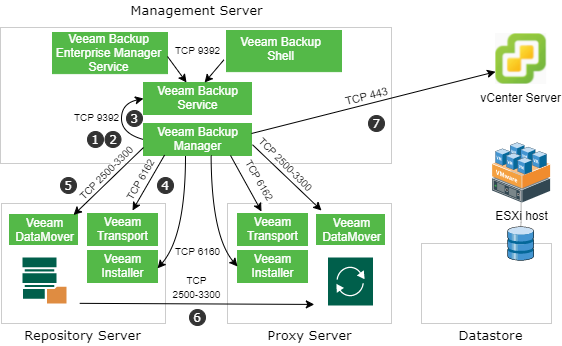 2a. Guest Processing for Windows-Based VMs

If it is not possible to connect to the guest OS or the connection is blocked by a firewall, Veeam Backup & Replication tries to establish a connection using VIX, as described in section 2b. 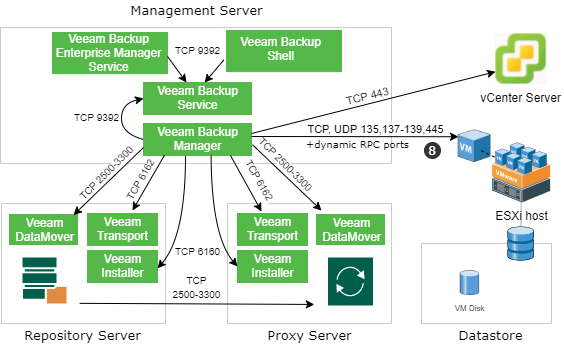 If there is no network connectivity to the VM guest OS, Veeam Backup & Replication uses the communication channel provided by VMware Tools (VIX) to interact with the guest OS and perform in-guest processing tasks. 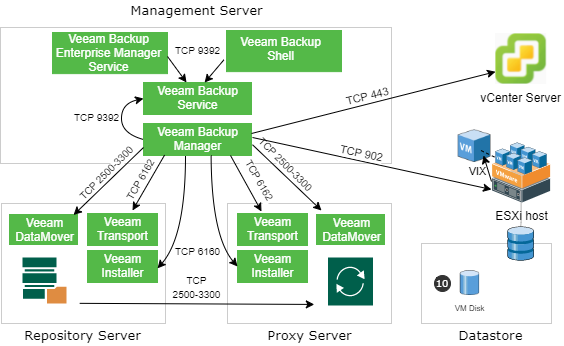 If pre-freeze and post-thaw scripts are enabled in the backup job properties, Veeam Backup & Replication obtains information about the guest’s IP address from VMware Tools. Veeam uses this IP address to connect to the guest network over SSH and perform in-guest processing tasks. Scripts reside on the backup server and are injected in the guest OS at the time of backup.

If there is no network connectivity with a Linux-based VM, Veeam Backup & Replication v10 now supports VIX processing for Linux OS’s too and will failover to this method.

One thing to keep in mind is that Pre-freeze and post-thaw scripts for Linux do not perform elevation to root (sudo) when networkless processing (VIX) is used. 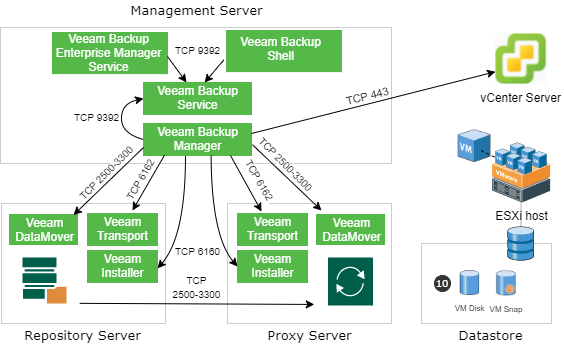 Right after the VM snapshot is taken, all quiesced disk I/O activities in the guest OS are resumed.

To read and transfer data from the VM snapshot, Veeam Backup & Replication can use one of the following transport modes:

For more information about each transport mode, see Transport Modes section of the Veeam Backup & Replication User Guide, or a corresponding section on this site.

In the Direct Storage Access mode, Veeam backup proxy connects to the ESXi host where the VM resides, and reads the necessary VM configuration files (such as *.vmx) using NFC over port 902. Backup proxies use VM configuration details to read VM data directly from the SAN/NAS Datastore.

In the Virtual Appliance transport mode, Veeam backup proxy connects to the ESXi host where the VM resides, and reads the necessary VM configuration files (such as *.vmx) using NFC over port 902. VM disks as of the snapshot state are hot-added to a virtualized Veeam backup proxy. The proxy reads VM data through ESXi vSCSI stack and unmaps the VM disks when finished. 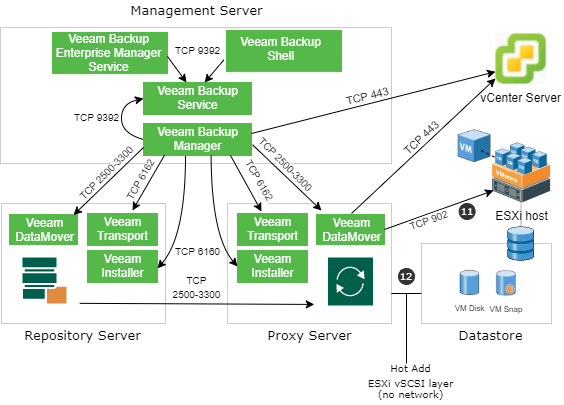 In the Network transport mode, Veeam backup proxy connects to the ESXi host where the VM resides, and reads the necessary VM configuration files (such as *.vmx) using NFC over port 902. In this mode, the same data channel is used to read VM disk data, too. 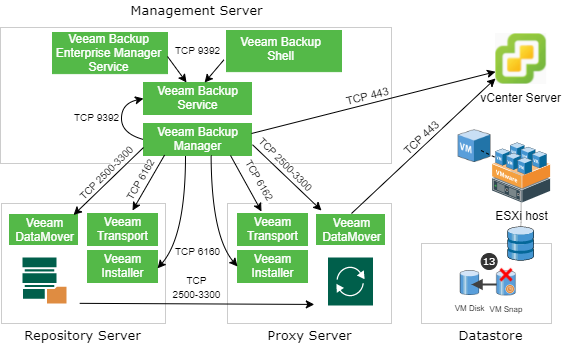